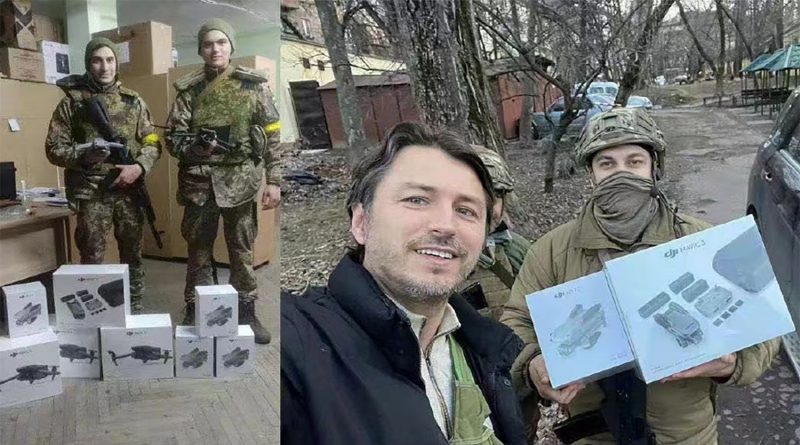 Military and civilian DJI drones are used extensively in Ukraine to frustrate the advance of enemy Russian forces. Not only has the Ministry of Defense called on owners of civilian drones to use their devices for combat, but there are also plenty of attacks with Turkish-made military drones. Dronewatch documented the latest developments.

Use of civilian drones

Ukraine’s defense ministry has asked residents of Kyiv who own civilian drones to help stop the Russian invasion. Trained drone pilots are asked to join a brigade that monitors enemy movements. Drone owners with less flying skills are requested to hand in their drones so that experienced operators can use them.

The ministry posted the appeal on Facebook last Friday, a day after the Russian invasion began. Civilians were hastily mobilized for battle. In doing so, the use of modern technology, including civilian DJI drones, is not shunned.

“Do you have a drone? Then give it to an experienced pilot! Or do you know how to fly a drone? Join the joint patrol with Unit 112 of the Kyiv City Special Brigade!” the Defense Ministry wrote. “Kyiv is our home, defending is a common task. Kyiv needs you and your drone at this difficult time! #StopRussia”

The idea is that the drones will be used to obtain an aerial overview of troop movements and enemy positions so that the Ukrainian army can fight more effectively on the ground.

It is also conceivable that the drones will be equipped with mechanisms to drop explosives over enemy positions.

However, the question is how long civilian DJI drones can be used in the fight against the Russians. There is a chance that the Chinese government will receive a request via Russia to force DJI to establish a no-fly zone over all of Ukraine. As a result, drones could theoretically no longer take off, unless they are used offline and the geofencing system does not receive updates. DJI previously introduced such a national no-fly zone in Syria a few years back.

A possible nationwide no-fly zone could be circumvented by the Ukrainian armed forces by equipping the drones with so-called NFZ mods. NFZ mods are pieces of software and/or hardware that ensure that a drone’s geofencing system is bypassed. Ironically, today’s most effective NFZ mods are marketed by a Russian company. At No Limit Dronez, drone owners from Ukraine can temporarily request free software NFZ hacks.

Flying civilian DJI drones in Ukraine is not without danger

Flying civilian DJI drones is not without danger for the operator.

If the Russian armed forces are in possession of mobile DJI AeroScope systems, the exact location of the drone pilot can be traced from every DJI drone within a radius of a few miles.

There is also equipment that can detect the source of radio signals. For example, improvised bombs (IEDs) are sometimes detonated remotely using RF signals.

To prevent this, any source of suspected radio emissions may be immediately identified and eliminated by the Russians.

Delivery of parts for civilian drones

To prevent the military from running out of batteries and spare parts, drone companies and suppliers from other countries are being called on to supply parts.

For example, Jacob Cereteli, a drone developer from Kiev, writes on LinkedIn:

“To all my contacts in Poland and other countries. Ukraine needs your support. We need small parts for drones. Batteries, servos etc., ready to collect from the border. Anyone who can help with purchasing, please let me know. We can pay immediately. If you are able to help, send me your phone number via DM.”

In addition to civilian DJI drones, military drones are also widely deployed by the Ukrainian army. Various recordings are circulating on social media showing Russian convoys being attacked by armed Bayraktar TB2 drones. For example, a trailer with BUK missiles is said to have been destroyed 100 kilometers northwest of Kiev.

The device is controlled via a satellite connection and can be deployed at great distances. The drone can take off and land autonomously. The system can be equipped with laser-guided bombs. The Ukrainian army would have a total of twelve of these aircraft. Of these, at least two are said to have been shot down by the Russians.

It is unclear whether the Ukrainian ‘People’s Drone’ is still being used, for which a crowdfunding campaign was started in 2014. At the time, the idea was to develop a home-built drone that would allow reconnaissance flights above the borders with the separatist regions of Donetsk and Lugansk.

The idea was to finance the purchase of at least twenty reconnaissance drones with money from citizens. As now, in 2014 there was a lot of willingness among the inhabitants of Ukraine to support their own army, not only financially, but also, for example, by providing services and products.

It goes without saying that not only the Ukrainian army, but also the Russian army uses drones. For example, photos have been shared on Twitter of a captured Russian unit that had a DJI Mavic 2 for gathering strategic information from the air.

Furthermore, it is obvious that the Russians will also use armed civilian DJI drones in their fight against the Ukrainian army units. In the separatist region of Donbas, deadly DIY drones were already deployed against the soldiers from Ukraine in 2020, as can be seen in the video below.

The deployment of drones is an important pillar of the defense strategy of the Ukrainian defence. But the battle in Ukraine is also largely taking place online. Worldwide, individuals and companies are committed to supporting the fight against the Russian army.

In addition to using social media to mobilize people, the hacker movement Anonymous has announced it has launched a cyber war against the Russian government. Elon Musk has ordered Starlink to be activated in Ukraine, and Google has banned live traffic information from Maps as the Russians may be able to take advantage of this.

1 thought on “Special: How military and civilian drones are used in the Russo-Ukrainian War”