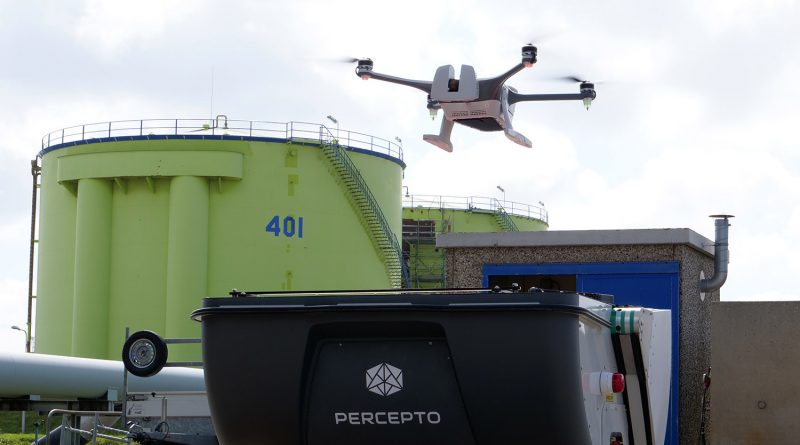 It has been two years since software company Falcker, in collaboration with autonomous drone provider Percepto, demonstrated on the site of Maasvlakte Oil Terminal (Port of Rotterdam) how an automatically operating inspection drone can be used to perform routine inspections or respond to calamities. That was a first in the Netherlands at the time. In terms of regulation, however, there were still quite a few hurdles in flying drones out of sight. But that is also changing.

Anyone who has ever seen an automatically operating drone-in-a-box in action immediately understands the potential of such a system. A drone that is on standby 24/7 in a docking station to take action and that is supervised from a central control room, can be used in countless applications. Such as routinely inspecting assets on an industrial site, doing surveillance rounds for security, or responding to a calamity or suspicious situation on a per-incident basis.

It is however not efficient that a drone pilot has to be on location to keep the drone in sight during the flight for regulator compliance only, let alone that the drone has to be controlled manually. From a technological viewpoint, this is not necessary at all: today’s systems are perfectly capable of independently performing a flight, whereby a remote operator can keep an eye on things and intervene if necessary. But for the legislator, beyond visual line of sight (BVLOS) drone flights are still very challenging.

Since that demonstration on the Maasvlakte in 2019, much has changed in Europe regarding drone regulations. The most important change is that the rule-based approach has been abandoned as of 2021. This has been replaced by a risk-based approach. In other words: if an operator can demonstrate through a detailed risk analysis based on the Specific Operations Risk Assessment (SORA) methodology that a certain drone operation can be performed safely, an operational authorization can be issued for this activity by the aviation authority of the Member State concerned. Thanks to the European origins of the new regulations, this authorization can in principle also be applied for similar drone operations in other Member States.

Unfortunately, new regulations do not mean that flights can be started immediately: on the side of the authorities as well as on the side of the end user and the operator, many puzzle pieces have to be put together first. It was therefore decided to develop two scenarios as a follow-up to the demonstration: a proof of concept scenario based on a lightweight drone and a permit in accordance with the old national regulations, and a second scenario based on a heavier system and in accordance with the new European regulations.

For the implementation of the proof of concept scenario, a collaboration was formed that, in addition to Falcker, also included Maasvlakte Oil Terminal and Gate terminal, the Port of Rotterdam Authority and Securitas. Technology partner in this process is the Dutch startup Mapture.ai, which has developed a drone box based on DJI’s Mavic 2 Enterprise Advanced. The advantage of this system is that the drone weighs less than 1 kg, but still has both an RGB and infrared camera. Thanks to its low weight, the system falls within the limits of the predefined risk analysis (PDRA) for drone box systems, as has been developed in the Netherlands.

Duco Boer of Falcker explains the process in more detail: “The idea of ​​this proof of concept is mainly to show that the combination of technology and permits is feasible and yields valuable applications. Think of asset inspections of, in this case, tanks and quay walls, deployment in case of calamities and security through surveillance. For this scenario, we have chosen to only fly above terminals at the end of the Maasvlakte, outside the controlled airspace of Rotterdam The Hague Airport. That makes it a little less complex from a regulatory point of view.”

The permit application has been submitted at the Human Environment and Transport Inspectorate (ILT) for approval. According to the plan, the system will be installed at the end of October and ready for use in November. But a lot still needs to be done before that time, says Boer: “We have to validate the emergency procedures and communication protocols, after installation we have to test whether the data connection and GPS reception are good and we have to set up the remote observation and control places in the MOT/Gate buildings and Falcker’s headquarters. We also still have to arrange the flight plans and fallback procedures.”

For the second scenario, Falcker formed a coalition with the Israeli company Percepto and Koole Terminals. “The use case concerns performing line-up checks during product manipulations and spill detection. We are also in touch with Port of Rotterdam to see whether supervisory requirements such as those contained in the ISPS can be met with this technology. For this scenario we are switching to the European model. We have to develop a SORA for this, because Percepto’s drone with its 10 kg is a lot heavier and we want to operate within the CTR of Rotterdam. This therefore requires much more paperwork and coordination with the ILT and Air Traffic Control the Netherlands. For example, our operational manual must be converted to the European format. I think we are at 95%, but I think it will take some time before the SORA is approved,” says Boer.

In October, a start has been made on determining all parameters for the new system, such as the location of the drone box, places for possible emergency landings, crossings of private roads and areas where the drone is not allowed to fly. Initially, the system will be controlled from Falcker’s office, which will also include radio contact with air traffic control, until U-space is introduced and radio contact is no longer needed.

According to Boer, the complexity is not so much in the technology, but much more on the regulatory side. “The most difficult part is the application and implementation of laws and regulations. It is a new matter for all concerned. For the end users, for Falcker, for the ILT, for LVNL, for the ministry and for the port authority. So it requires patience as everything has to be properly aligned. It also requires a lot of thinking and sometimes courage. These are baby steps into a new era, but the European rules provide a good framework for the implementation of procedures and technology.”

Falcker’s plans go far beyond the installation of drone boxes in the Port of Rotterdam area. Boer: “Falcker becomes a value added reseller of Percepto in the Netherlands. We will also focus on the rest of Europe. And not only with regard to asset inspections in the oil and gas industry, but we are also looking at applications of drone boxes in other sectors.”

In the long term, Boer also foresees possibilities for robots operating on the ground. “Percepto’s system goes much further than controlling a single drone. It can control an entire fleet of drones and also ground robots, such as the well-known robot dog Spot from Boston Dynamics. We have truly entered a new era. Difficult or risky tasks that are now carried out by humans can hopefully be taken over by robots in the future.” 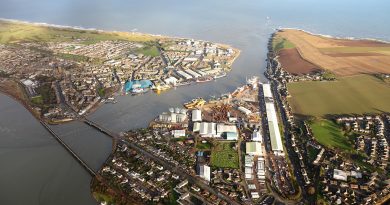