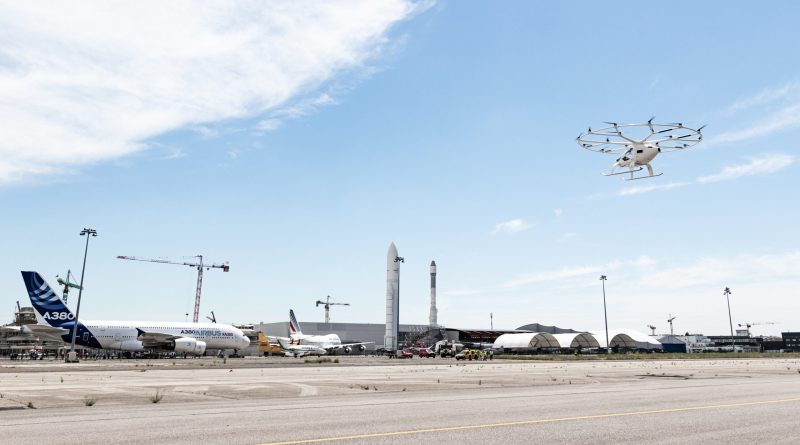 Today, the pioneer of urban air mobility (UAM), Volocopter, flew their Volocopter 2X electric vertical take-off and landing (eVTOL) aircraft at Le Bourget Airfield during the Paris Air Forum. With both, the flight demonstration of their Volocopter 2X and the VoloCity model onsite, the German UAM developer demonstrated the progress they are making to introduce eVTOL aircraft as an addition to existing transportation in the Paris region.

The 3-minute remote controlled flight was the first public flight demonstration of an electrically powered air taxi in France. It gave the public a real-life experience of what an air taxi looks and sounds like in operations. Attendees watched as the Volocopter 2X flew a 500 m route at speeds up to 30 km/h and 30 m high along the Le Bourget Airfield. This flight marks the beginning of a multi-step test and market development campaign in cooperation with the French Civil Aviation Authority (DGAC – Direction générale de l’aviation civile) to safely bring electric air taxis to the Île-de-France region. Attendees could sit inside the VoloCity model for a first-hand experience and detailed explanation of the benefits of electric air taxi services.

“The first flight today in Paris highlights Volocopter’s commitment to bring air taxi services to this region in time for the 2024 Olympic Games,” says Florian Reuter, Volocopter CEO. “The alliance of the Paris region, Groupe ADP, and RATP Groupe and their intent to bring electric air taxis to France is a stellar example of the collaborative approach we see to be the most successful for adding this exciting category of mobility to cities globally, ” said Florian Reuter, CEO, Volocopter.

Volocopter was announced as the first vehicle and operations partner for the launch of the urban air mobility industrial branch in Paris in September 2020. Now the company is planning to open a local office and is recruiting staff and expanding local partnerships to ensure the new UAM solutions meet local demands. Volocopter is also working on an agreement with Groupe ADP and RATP Groupe to collaborate for the 2024 Olympics to enhance regional connectivity in a meaningful way and showcase the benefits and key attributes of urban air mobility.

“Today, we were as close as never before in France to experience electric aviation. Volocopter is a vivid example of what the futures of aviation could look like, both carbon-free and innovative, that Groupe ADP wants to accompany thanks to our infrastructure assets, expertise, and know-how. Along with the other partners of the RE.Invent Air Mobility initiative, Volocopter is now ready to enter a first test flight campaign by September on the Pontoise airfield sandbox we have been building up in the past months. And we are thrilled to be partnering with them, RATP Group and DGAC towards our objective of flight demonstrations in the Paris Region during the 2024 Olympic Games, to lay the foundation of a strong UAM industrial ecosystem in France,” said Edward Arkwright, Deputy CEO, Groupe ADP.

Volocopter is well advanced in the certification process with the European Union Aviation Safety Agency (EASA) for commercial launch. As the first and only eVTOL developer with Design Organization Approval (DOA) from EASA, Volocopter is leading the way to introduce sustainable UAM solutions to cities around the world. Volocopter’s approach to introducing these services is to create a UAM ecosystem in which passengers and goods experience seamless connectivity with their cities via Volocopter’s mobility solutions: VoloCity (aircraft for intra-city connections), VoloConnect (aircraft for city-suburb connections), VoloDrone (aircraft for cargo transport), and VoloPorts (take-off and landing sites) which are all fully integrated on the digital platform VoloIQ (real time digital twin of the ecosystem).

“After having responded as the first player in the urban air mobility industry, in the context of the call for expressions of interest, we are very pleased that Volocopter has confirmed its development and its establishment in France. For RATP Group, this new mobility aims to complement our traditional transport modes,” said Marie-Claude Dupois, Director of Strategy, Innovation and Development of RATP Group. 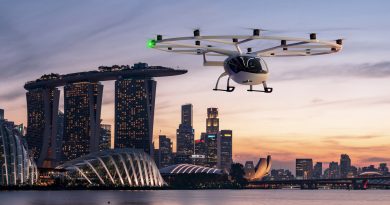 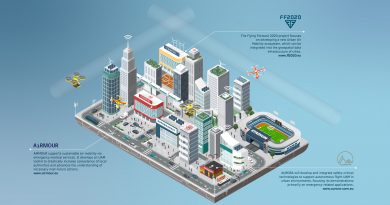 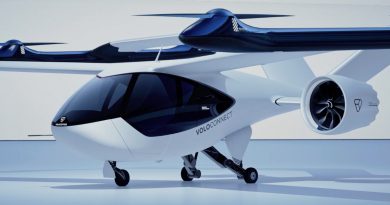